Miegs Field in Chicago to reopen?

https://www.aopa.org/news-and-media/all-news/2019/february/14/could-meigs-make-a-comeback?fbclid=IwAR0TK3rHYXZARDUdciZ6DjaJ1OG5M-WSYC9I_IW8PoRrEMVg2d_fF7l-g0Q#.XGa0GP_KFas.facebook
Posted by Aargus Group at 1:20 PM No comments:

PRIVATE AIR CHARTER IS A BETTER WAY TO FLY

✈  616-956-7600. What if you could avoid almost every airline hassle that youve ever encountered? A way to visit one city or many in the same trip without all the frustration and schedule risk, keep your sanity, and arrive well rested, fresh and ready to dive into your business day?. Using private air charter flights, we have that solution...TIME, YOUR MOST PRECIOUS COMMODITY
✈   What is your time worth? How about effective group communication while traveling and precise aircraft departure and return times tailored to your schedule? Using a private air charter, be it a private jet or other type of aircraft saves time, adds flexibility, offers schedule convenience and affords you the knowledge that your trip will go smoothly, letting you focus on the day ahead. Arrive at the airport and your charter flight will be taxiing out within minutes.AIRLINE TRAVEL AIN'T WHAT IT USED TO BE
✈  Airline travel, as it evolves, becomes more and more frustrating and subject to delay inducing events, not to mention the unpleasant security checks, long lines, and the risk of missed connections and mid-route stopovers. Missed connections or flight departure delays can or seriously affect your travel plans. A private plane charter relieves you of all that risk. 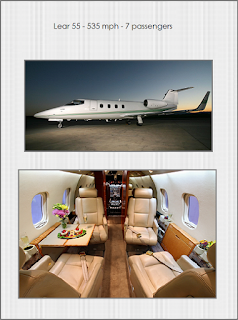 Posted by Aargus Group at 3:03 PM No comments: 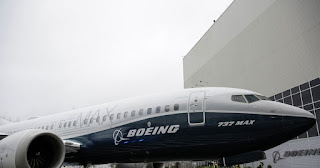 Posted by Aargus Group at 5:01 AM No comments:

Email ThisBlogThis!Share to TwitterShare to FacebookShare to Pinterest
A senior member of the union representing Boeing’s engineers says Boeing’s cost-cutting culture is to blame for production problems with the 737 MAX and other planes.
Stan Sorscher, a Labor Representative at the Society for Professional Engineering Employees in Aerospace (SPEEA) is the author of the letter, offered to the Seattle Times as an opinion piece.
“The cost-cutting culture is the opposite of a culture built on productivity, innovation, safety or quality,” Sorscher writes.
“Boeing’s experience with cost-cutting business culture is apparent," he continues.
"Production problems with the 787, 747-8 and now the 737 Max have cost billions of dollars, put airline customers at risk, and tarnished decades of accumulated goodwill and brand loyalty.”
It’s the first time since the grounding of the Max that a senior figure in Boeing’s engineers union has spoken.
Though investigations into two fatal Max crashes are incomplete, evidence of engineering errors have surfaced – errors that were not discovered in testing. Questions have also been asked about the degree to which Boeing and the Federal Aviation Administration collaborated in certifying the plane as airworthy.
Sorscher, a former Boeing engineer, points to a major change in Boeing’s internal culture in the late 1990s.
Before that time, the company was focused on the performance of its products.
This was the era of the bold bet on the 747, and it was also a time when a low little plane called the 737 got its start. That plane became Boeing’s best-seller and remained so over many iterations.
In the 1990s, according to Sorscher, Boeing put workers at the center of its performance-driven universe. That plane of that era was the 777. It was a time of partnership between workers and executives as they learned together how to produce the plane, and many engineers speak of this period as the most fulfilling in their professional lives.
Among the most glorious moments – Boeing executive Alan Mulally hugging a worker who had helped to solve a problem, getting grease all over his thousand-dollar suit and plainly not caring.
“It would have been career-limiting to withhold negative information from managers” at the time, Sorscher observed.
But that has changed. With the 787 program in the late 1990s, Sorscher says, Boeing reset the playing field. Washington state would have to compete with other jurisdictions, offering tax breaks to secure production lines. Suppliers would have to compete with rivals around the world. Workers would discover their positions were precarious.
The atmosphere inside Boeing changed.
In an interview with KUOW, Sorscher said Boeing engineers receive clear cultural messages that identifying problems is thought of by management as making trouble.
“If the message is “follow the plan” and you watch co-workers who raised an objection and the problem isn't taken seriously or are they're considered troublesome, then that's a cultural message you pick up,” he said.
From a shareholder perspective, Boeing’s approach to its business has been wildly successful. The company is enduring its second worldwide grounding in recent memory.
However, worldwide demand for airplanes is riding a high. And Boeing has diverted cash flow into dividends and share buybacks that have helped boost the company’s stock.
From 2000 to the present, Boeing’s stock price has grown from $44 to $356. The stock hit a peak of $440 just before the crash of an Ethiopian Airlines Max jet last March.
A spokesman for SPEEA confirmed that the union had given Sorscher permission to produce the letter, however he could not say that the union specifically endorsed it.
Posted by Aargus Group at 4:48 AM No comments:

Series I - Vol 6CARRIBEAN PHANTOMSMy name is Daniel Dunn and I own Aargus Air Charter, based in Grand Rapids, MI This is an new segment in an on going series of stories from my 38 years of flying that I hope you will find interesting.

Early in my career, during the late 70's, I did a lot of charter flying in the Caribbean out of Key Largo. A beautiful place and very "country" at the time. The old style double T telephone poles with sagging lines and a tightly knit local population where everybody knew most everybody else. I had a had house with canal access to the ocean side and a small 19' Robollo mono-hull with a 200 horse Merc on the back. Spent many pleasant days out on Molassis Reef.

In the summer of 1978, I had taken some friends over to Nassau, Bahamas in my single engine Piper Arrow to enjoy a weekend on the island's at the Casino. On Sunday about 3:00pm we departed the island in a single engine Piper Arrow headed back to Key Largo, our home airport. The airplane holds 4 persons and we were full. The sky was very blue and had loosely organized lines of billowing cumulus clouds most of the way making for a very scenic flight.

When approaching the US coastline from outside US airspace, which we were that day, there is an invisible perimeter line called the Air Defense Identification Zone, more commonly know as the "ADIZ". Every airplane entering the US from anywhere outside much pass over this line and must have filed a flight plan telling controllers who they are, what type of aircraft they will be flying, estimated time of ADIZ penetration, and where it will occur. This is there I way of identifying aircraft that may not be authorized and possibly up to something unsavory like smuggling drugs or worse. A call to local air controllers is generally made just prior to entering the zone to establish two way contact to further ensure that they know who you are.

On approaching the Zone and after making the mandatory call to ATC, I settled in for the last half hour of the flight. Minutes past and as I was studying my map with my head down, I sensed something in my peripheral. I looked up and to the left and was shocked to see and unmarked F4 Phantom military jet, just hanging the about 50 feet off my wing. He had after burners on to enable him to go slow enough to stay on position off my wing in a very nose up configuration. The pilot had a black visor helmet on and he did not attempt to look my way or signal in any way. He stayed that way for a good three minutes and just and quick as he came he peeled off in a steep descent to get his speed back. I watched him fade t the left. Suddenly from the right seat, where one of may passengers I heard a loud Woahhhh. To our right hung a second F4 in the same configuration, again with no marking whatsoever. It was not the first one because I could still see him exiting down to my left. As with the first, the pilot did not look our way. This was repeated again on the left with the first plane and a final time on the right with the second. And then they were just gone.

My next move was to contact Homestead Air Force base, about 50 miles away to ask if they had activity in my area, they said they did not. Once back on the ground I though the situation trough. We were only 75 miles form Cuba, but the aircraft could not have been from there because they were F4s. Cubans operated Russian Meg aircraft. My conclusion was that these aircraft were most likely part of some US based, convert operation. On seeing our small aircraft, they decided to have a little fun or perhaps just practice intercepts. That was definitely one of those "so glad to be back on the ground" moments for me. It could have very easily gone the other way. The Lord was truly riding the right seat that afternoon. There area were in lies directly inside the infamous Bermuda Triangle where usual things can happen. This was one of those things, but fortunate for us, it came to an uneventful conclusion. 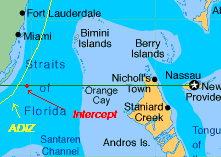 Posted by Aargus Group at 5:36 AM No comments:

Here's a very cool tool for those that have people coming or going on an airline flight. You can see real time where a given flight is and watch it progress. You can search for a given flight number to highlight it on the map. It also demonstrates how many aircraft there are in the air in the Midwest. 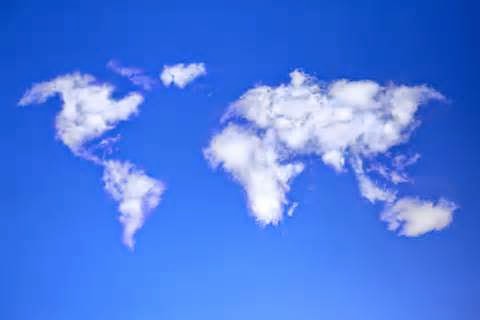 Interesting cloud formation, is it not?
Posted by Aargus Group at 10:10 AM No comments: